Image thanks to Navy’s Solant Amity I Cruise 1960

All that wilderness, and where did they put the temperature sensors? Near a concrete slab. These guys aren’t even trying to be serious.

Talk about a gorgeous view. This jaw-dropping wilderness is also the site of one of the 20 GAWS (Global Atmosphere Watch Station, for the WMO) which tracks stuff like CO2, methane, nitrous oxide, and ozone. There’s a temperature station there too, and Tim Wood helpfully sent me up-to-date pictures.

You might wonder, at such an important site and among the wilderness, how could anyone find a place to put a temperature sensor that wasn’t a Class I, top notch siting? It was all too easy. By the looks of this photo (below), it might just qualify as a Class 4, since there a large brick or concrete and metal structure… less than 10 meters away. (For info on classifications: Surface Stations Project*, NOAA Site information here.)

“As you can see from the pictures, if this is what passes for a world class station then….

Note the gazillion undeveloped hectares in the background that would be more suitable. But that would presumably require someone to do more than walk out the back door.” 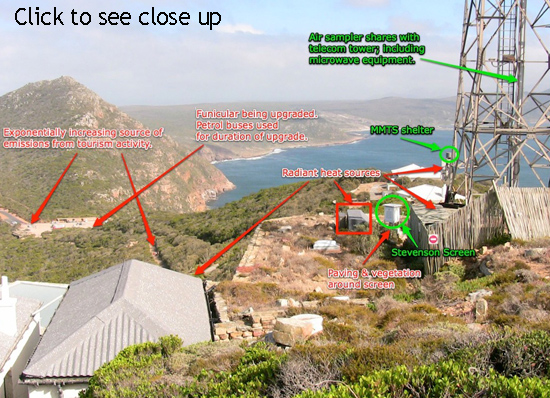 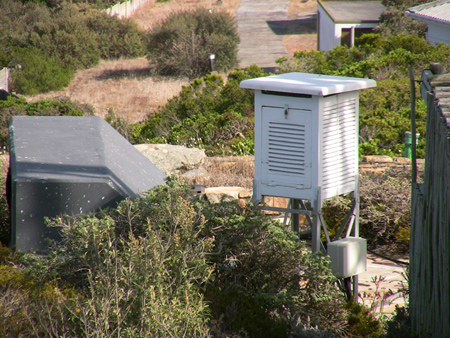 Vegetation and shadows encroaching on the Stephenson screen… 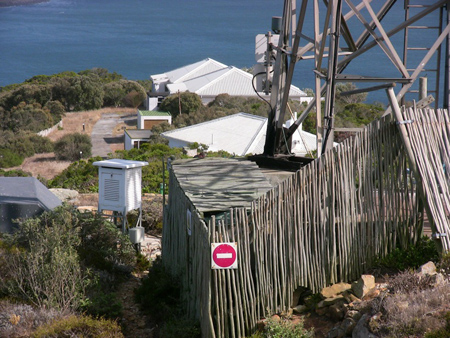 The big concrete block under the tower is… close 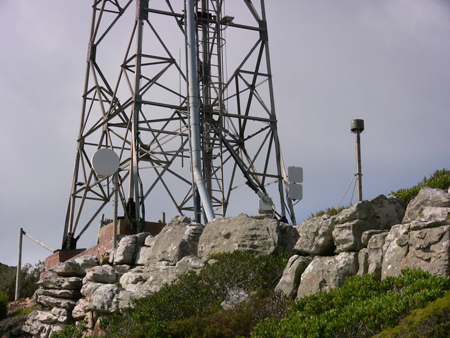 Click on the shot to see the larger view.

Chiefio tells me that Cape Point is on the canonical list:

But it is not in the 2009 active list. Hence it was lost sometime in the Great Dying of Thermometers.

Curiously that R (as in “66R”) stands for Rural. So when Cape Point is included in the glorious global amalgamations of data it would be homogenized into the Rural sets, and in a way that’s fair: 99% of the surrounding kilometer is rural.

Tim also points out that there has been a large increase in ship traffic since 1994 (at the end of Apartheid). “The supposedly pristine Southern Ocean air can’t be that way with heavy fuel oil exhaust gases in the mix!” (See here for shipping traffic, with Johannesburg somewhere between 2000-5000 journey’s per year).

No wonder then, that when people search with the right tools they can’t “find” any Urban Heat Island effect. Urbanized wilderness, or ruralized suburbia, what’s the difference? Rural stations like these blow away the idea that temperature sensors in remote wilderness can be “trusted” without site checks.

*No this is strictly an ad hoc random anecdote, not a proper site survey, and not part of the Surface Stations Project. Don’t blame Anthony for all the loose ends here.

The station was moved in 1995. The Station information is http://gaw.empa.ch/gawsis/reports.asp?StationID=35