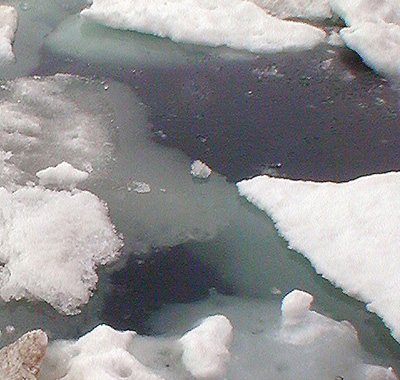 New Scientist doesn’t have enough column space to tell you that Briffa’s Yamal tree ring series depends heavily on just one freak 8-standard deviation tree in Northern Russia, and that multiple temperature reconstructions use that highly dubious series, but they do have time to warn the world about the effect of melting sea-ice on global sea levels.

If you want to see the Climate Debate discussed from both sides, see a real debate, and contrast it to the irrelevant minutiae of propaganda pushed by magazines like New Scientist.

Because sea ice is fresh water, it has a lower density than salty ocean water, so even though floating ice won’t raise water levels by melting, the fresh water in the ice blocks can apparently make a small difference. “Small” being the word.

“…they estimate that about 746 cubic kilometres of ice are melting each year, overall. The ice melting is diluting the oceans, decreasing its density and raising sea levels as a consequence,” says Shepherd.

Watch out for that extra twentieth of a millimetre. Literally 0.049 mm per year.

Imagine, at this rate, in just one hundred years, sea levels could be… five millimeters higher.

Would New Scientist take part in reporting naked speculation based a wild extreme?

“…if all the sea ice currently bobbing on the oceans were to melt, it could raise sea level by 4 to 6 centimetres.”

And what are the chances that all the worlds sea ice will melt? All 16 – 22 million square kilometers.

And if millions of square kilometers of sea ice did melt, you’d suppose we had more to worry about than the 5 cm extra on top of the usual high tide.

To see me take down New Scientist for it’s scandalous bias and unscientific behaviour, click here or here.