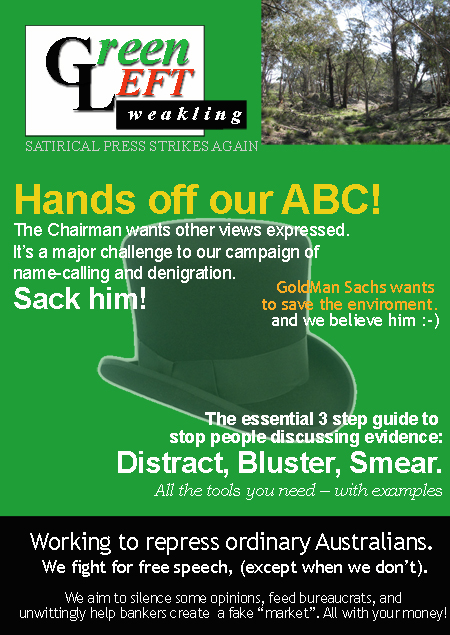 Green Left Weekly has attacked the lone voice of reason at the Australian ABC (Chairman Maurice Newman), and demanded he be removed, all because Newman dared to suggest to ABC reporters that they might want to present both sides of the story. How scandalous!

Green Left is an Australian magazine that’s been in publication since 1990. In 2005, it apparently won an award as “Australia’s most popular political site”. How times have changed.

Only a few weeks ago, they were claiming to fight for free speech in Brunswick, Melbourne, and a few days ago, for free-speech at Sydney University. When Barkly Square Management confines them to just one stall “in a dead location”, that’s an attack on freedom of speech, but when the ABC chairman suggests reporters interview scientists on both sides of an issue, free-speech be damned: It’s time to howl “intimidation”.

Why are they so afraid of skeptical scientists getting a hearing? The evidence is errr…overwhelming, eh? Or is it just the PR that’s overwhelming?

Renfrey Clarke was once Green Left‘s Moscow correspondent (where better to learn good Green values?). He could always point out the “obvious” scientific errors skeptics apparently make, but is too busy making ad hominem slurs.

Clarke backs his strong claim with comments from Clive-Let’s-Suspend-Democracy-Hamilton (who  calls us “conspiracy theorist deniers” while he invokes conspiracies, throws insults, and denies the evidence). What can I say? The inconsistent quotes the confused.

Clarke thinks Fran Kelly should have asked Christopher Monckton why he “lied” about being a member of the House of Lords? The answer is because Fran Kelly is too smart for that. She knew Monckton would make her look like a fool if she asked that question. He would have said what he always says, that he is a member of the House of Lords. He’s a non-voting member, a hereditary peer, as in “Lord” Christopher Monckton. He can attend, he can pose questions, but he can’t vote. And it’s a big “so-what” in any case. Is the climate changing due to man-made carbon emissions? Christopher Monckton’s biography is not the place to find the answer.

Fran Kelly probably wouldn’t ask Al Gore if he felt he deserved his Nobel Peace Prize for a science documentary full of errors and half-truths promoting an industry that he has already made millions of dollars from. Gore is not a scientist, but he does stand to become one of the first carbon billionaires. Isn’t that worth the odd grilling?

Green Left should be turning itself inside out wondering how it came to be defending billionaires and bankers, and attacking self-funded independent people who represent a vast slab of the community. What about tolerance of other views? No No No. Green Left expects taxpayers’ dollars (through “our ABC”) to be used to unquestioningly promote claims of intergovernmental committees and massive financial houses. And free speech is optional for 40+% of Australians who don’t agree with them.

The bluster rolls on and on

The last serious effort to pose an alternative, “natural” cause for global warming, Henrik Svensmark’s theory of the effects of cosmic rays on cloud formation, was disproved years ago.

Clarke doesn’t know it, but he’s probably referring to Lockwood and Frolich, who reckoned that Svensmark was wrong. But, they tracked the wrong kind of cosmic rays with the wrong temperature sets, and came to the conclusion that although cosmic rays and sunlight were very well correlated until 1980, it all fell apart after that. Svensmark had no trouble putting them straight, and his devastating graph shows what a real correlation is. (Click on the graph to read my short synopsis of the cosmic ray theory.)

That Clarke thinks he can make a statement like this without reference to any scientific reviews or papers shows how unskeptical he is. And what’s the opposite of skeptical? Gullible. The “Gullible Greens” is a title that will stick for years to come as the Green movement gets exposed for being an unwitting tool of big banks and big bureaucracy. Huge banking institutions soak in the false free market of “carbon credits”, where no real commodity is traded back and forward and then “sold” to consumers who are forced to pay for something they would never give a cent for in a real market. These meaningless, unverifiable permits to air over China that-might-have-more-carbon-in-it is the very antithesis of a free market. But, flaky uneconomic Greens can’t tell the difference between a free market and a fake one.

Any halfwit can claim to blow away an argument by association with dubious other unrelated topics. And the Greens are notoriously bad at sticking to a topic. They don’t just go outside the room, across the road, and out of their way to drag in the mud, they resort to time travel to find the most irrelevant dirt they can dig up.

Where does demanding “balance” in the reporting of science lead? To requiring that evolution be balanced with creationism, modern medicine with leech therapy, and astronomy with the signs of the zodiac?

See, we can do that too. We can match them for glorious scientific scandal after scandal:

Where does following a consensus get us? It slows progress and kills people. The “consensus” once told us that human-powered flight was impossible, that continents couldn’t drift, that bacteria couldn’t cause stomach ulcers, and that surgeons didn’t need to wash their hands. The “consensus” killed tens of thousands of women in their prime, stealing mothers away from newborn babies, and continued to do so even after one doctor bucked the trend and published empirical evidence detailing the hundreds of lives he had saved…

But, I’m not just matching them with irrelevant blather. I’m asking questions about how we resolve a scientific question, and my examples are directly relevant to logic and reason. I’ve used a story from 150 years ago, but it’s timelessly correct. Their line of thought about “whether to write both sides of the story” is not about science, but about censorship.

Posts like Clarke’s tell us why the Greens are destined to always be a minor party. Rather than consult widely, they suppress and insult a large part of the voting population. They embarrass themselves trying to crush a community movement that’s mostly made of volunteers. Then, when they do speak “science”, they trip over themselves to show how unscientific they are, making baseless assertions and logical errors, and spouting things that are simply wrong.

They “reason” from the Stone Age, and wonder why they’re destined to be sidelined in the Space Age.