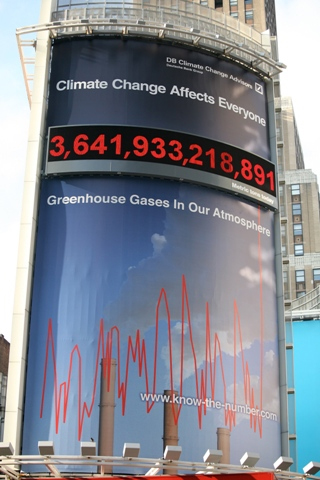 Six months ago, Deutsche Bank was overcome with concern about the planet—bless its soul–and launched this 70 ft. vision of climate doom opposite Madison Square Gardens, New York. You can feel relieved. The bank paid for the carbon credits (no doubt through one of its own funds), so the 40,960 low-energy light-emitting diodes are “carbon-neutral.”

Kevin Parker for Deutsche Asset Management said: “We hope with this sign that it is going to foster a sense of urgency about the problem, raise public awareness, create a need for education and really spur a call for action”

In a more candid moment, Parker said: “Well, what we’d like to see is a price on carbon. That is absolutely foremost in everyone’s minds involved in the climate change debate. The governments around the world have to get on with regulations…”

In a brazen ambit, Parker suggested we all might like to invest more in renewable energy: $45 trillion more (over 40 years), and that’s only going to solve half the problem”. There is no end to the audacity.

Is this anything other than blatant advertising for a Cap N Trade scheme? Ponder if Exxon launched a similar billboard with the “costs” of carbon mitigation, it would be vandalized, scorned, and disparaged even by august associations like the Royal Society.

A NASA official would call for corporate heads to be jailed for crimes against humanity.

It’s ok for bankers managing $695 billion-dollar funds to take sides in a science debate…. That’s not the same as corporations trying to influence policy.

You, too, can add a piece of moving propaganda to your site to let people know just how much bankers really want us to trade carbon…

“We believe that enabling all web site operators to easily display the Carbon Counter ahead of the Copenhagen summit will continue to raise awareness of this very serious issue,” said Kevin Parker, Global Head of DeAM and member of Deutsche Bank’s Group Executive Committee. “Major global investment is essential to preventing catastrophic climate change, and it is imperative for governments to build the regulatory and policy frameworks that accommodate and encourage that investment. We are hopeful that world leaders will make significant strides in that direction in Copenhagen.”

Our Climate is Changing!

Go on, click on that widget.  Wonder how long it will be before the dollars in the carbon market tallies up to be more than the mega-tonnes of gas.

You can see the bank officials launch the carbon counter and stand in the rain, telling everyone there will be even more rain like this in flood-prone NY in the New World…

So exactly what does it count?

The “Number” on the Carbon Counter is based on measurements developed by scientists at the Massachusetts Institute of Technology (MIT) that include all long-lived greenhouse gases covered under the Kyoto and Montreal Protocols (24 gases excluding ozone and aerosols).

According to the IPCC AR4 Synthesis Report, atmospheric CO2 concentrations were 379ppm in 2005. The estimate of total CO2-eq concentration in 2005 for all long-lived GHGs is about 455ppm

Global carbon goes up and down on a seasonal basis, but it wouldn’t help if people saw the numbers fall for months on end, so they’ve “helpfully” made it seasonal (though wrong), so punters don’t get confused.

The next time DeSmog tries to paint Big Oil as the nasty guys influencing policy with money, you can ask how many 70ft live ticker billboards the skeptics control in New York.

BTW: If you are interested in carbon emissions trading markets, you can download a Market Insights Report from SBI for only $3,995.00. (And for another $800 they’ll post you a hard copy to go with that.)

There are no arguments that stop religious believers, but as I said in October, it only takes six words to slow down the dutiful supporters: Banks Want Us To Trade Carbon.

Since when were banks “environmental”?

The company, as of March 2009, has about $4 billion under management involving climate change. Its assets include renewable energy projects in Europe and as well as a climate change fund that invests in companies involved in clean technology, energy efficiency and environmental management.