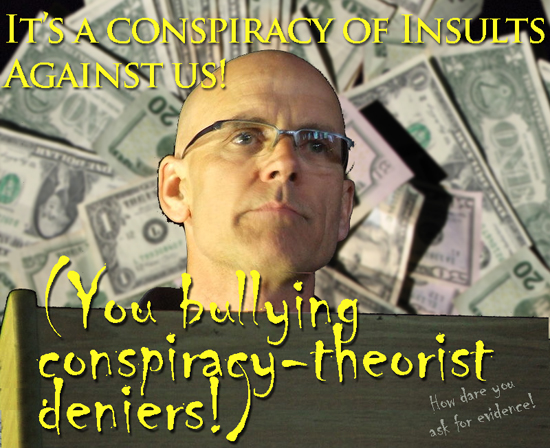 It’s tough when you can’t talk evidence, and the topic is science. What’s left is just the Stone Age mud-throwing campaign.

There’s a Matrix-moment coming for Clive Hamilton. Skeptics are now the grassroots activists against Big Money and Big Lies, fighting for the poor and the environment. He’s doing his damnedest to suppress community participation, promote intolerance, and effectively fight for banker profits, corrupt scientists, and plundering bureaucrats.

The AGW camp has on its side all the authority positions in climate science (you don’t get appointed unless you believe), all the climate and science journals, all the government and university funding, the computer models, the Nobel prizes, the Western governments, all the propaganda money can buy, the Greens, the politically correct, the UN, and all the mainstream media (at least, until recently). And the skeptics have…evidence, logic, retired scientists, and donations to blogs. Clive imagines he is speaking truth to power.

Since he can’t win on the science, he tries to bully instead (ironically while whining about…bullies). He peddles easily refutable lies, using unverifiable words from anonymous entities. Twice, Hamilton even contradicts himself, probably because he knows he’s making defamatory claims he can’t back up.

For the last six months, I’ve been systematically exposing bullies. I’ve spoken about real bullying in science, about scientists who are sacked, about paid attack sites set up to smear researchers (like DeSmog), and about the grassroots work done by volunteers against an industrial climate machine with 3,000 times the funds. The second Skeptics Handbook was titled “Global Bullies Want Your Money”. I didn’t let the Prime Minister get away with throwing insults instead of discussing the policy or the science, and I solved Richard Black’s  BBC request for “reasons why most women don’t speak out” (women don’t want to face the global bullies, eh?). I also busted Hamilton’s previous smear. Yet, daily he exposes himself as an unwitting sock-puppet tool of Big-Money.

The best he could do would be to quietly fade into the background. Instead, he’s embarrassing himself and the ABC, and desperately polluting the discussion with innuendo, baseless implications, and the only bullying he can find: anonymous swearing that is noxious, but ultimately unverifiable. I mean, without checking these Internet addresses, for all we know some of the howlers are staged comments from pro-warming fans. They use the same trick on my site.

After I exposed Professor Pitman for throwing baseless smears, I received many comments under fake names from UNSW Internet addresses (and unlike Hamilton, I do have the evidence). There was a pattern of transparently pretending to be skeptics, but openly attacking other skeptics, sometimes inventing libelous lies about the real commenters. It was such a lame, transparent tactic, I hardly felt it was worth an ABC press release.

You know, people swear at us and call us insults a hundred times a day: “Deniers”.

Clive [lets-suspend-democracy] Hamilton is, after all, just a big-scale bully. He doesn’t want to listen to the electorate, or ask us what we think. He just wants to belittle, smear, and sideline anyone who disagrees with his opinion.

The editors of  the The Drum Unleashed ought to wince with embarrassment: Clive makes the headline claim he can name the organizers of a bullying campaign, but he hasn’t got any evidence about who organized this campaign, or even if there is a campaign.

Poor Clive, it must be awful to pin your identity to a fake crusade, only to discover that everyone else found out it was bogus before you.

I think the article should have been junked by the ABC editors solely because he can’t form a single coherent point of any substance, and it’s a literary smog. Clive unleashed: “I’ll name the bullies: we don’t have evidence: these are the people : but don’t think I’m suggesting they are doing this”. That’s just page 1.  But wait…there’s more “[I]t would be a mistake to believe that the army of sceptical bloggers is in any sense in the pay of, or directly influenced by, the fossil fuel lobby.” Followed by: Tomorrow: The Exxon-funded think tanks that feed climate denial. Doesn’t outright self-contradiction embarrass the ABC anymore? It used to be known as “delusional”.

Poor Clive, it must be awful to pin your identity to a fake crusade, only to discover that everyone else found out it was bogus before you. Not skeptical, shucks: gullible. I just wish for his sake he wasn’t going down in neon lights with an audience. If he has to mentally self-combust, surely his friends can take him out off the public stage? Give him some dignity, I say (and perhaps some medication).

Got any evidence I support nasty emails? Didn’t think so…

It’s so easy to prove (with written references) that I don’t support aggression or violence. In fact, the more I blog, the more essential I think manners are. I ask emailers to our politicians to be carefully polite. Civility is my only requirement for commenters. And I attacked a book that incited activists to break the law. Nor will Clive find many violent nasty comments on my site, except for a few from warmists I leave up to show how petty and noxious they are.

There is no civilization without science,
but there is no science without civility

What drives denial? The mystery that isn’t.

What drives us? It’s a well-known universal trait across human cultures called punishing free-loaders. All cooperative societies (even fish) have to have systems to stop parasitic greedy scum from taking advantage of  altruistic kin.

Newsflash:  Like all species, humans just hate to be exploited, used, and lied to. We the people are not just annoyed that the scientists we support have hidden the data we pay them to collect, and we’re not just inconvenienced when people play on our good nature and ask us to save the world in order to line their own pockets.  It’s a human instinct: We’re a gregarious species, and nothing bar anything inflames us as much as a parasitic free-rider, except possibly, a free-rider who glorifies himself as part of the team, but traitorously works against us: e.g., the lowlife who cries wolf, claims to be working for all our benefit, and then makes off with his own private golf-club using 300,000 gallons of water a day, all while his neighbors starve.

These are the people we pillory, mock, and pursue–all with words. Having said that, please note readers that you can channel your justified anger better by cutting these people down with  impeccable manners.

What drives denial is just plain old evolution and game theory. Social groups that put up with parasites didn’t survive. Those who shamed them or evicted them did.

Welcome to reality. In modern times, there has never been a grassroots movement as global and powerful as this one

Hamilton gives away his aims in sentence number one.  A spontaneous uprising of the masses against him is something he just can’t have (I’ve got bad news for you Clive). He admits that an apparently spontaneous expression of citizen concern carries more weight than an organized operation by a zealous group. Welcome to reality. In modern times, there has never been a grassroots movement as global and powerful as this one; never before have thousands of scientists risen up in anger; never have professors of atmospheric physics, chemistry, meteorology, and maths gathered names on one petition, or written to congress with the words “You are being deceived”. And since ClimateGate, they’re joined by surgeons from Sydney, lawyers from London, and engineers from everywhere. Smart honest sharp people are moving in as word of the free-loaders spreads.

You want spontaneous? The main Australian conservative party (the Liberals) have noted many times since the ETS debate in November that they were shocked at how many e-mails they got, and floored that they were passionate and individually written. In late January, the staffers I spoke to were exclaiming they still hadn’t logged all the names. They were thunderstruck that unlike the organized greenie campaigns, they were not swamped with tick-a-box postcards or formulaic messages. It was an historic week in politics. Democracy in action.

Nowadays, the extremist position is the idea that we can control the weather by issuing unverifiable permits for emissions that might have happened in air over China.

Behind the times, Hamilton clings to the delusion that he’s part of the mainstream. Recent polls in the UK show only a quarter of the population still believes in man-made climate change. Down from over 70% two years ago. The mainstream is not convinced, and the “Strongly Disagree” position is sweeping into popularity. Nowadays, the extremist position is the idea that we can control the weather by issuing unverifiable permits for emissions that might have happened in air over China.

Oh, and look! Was Clive-Bully-Hamilton trying to intimidate me again by using my maiden name, as if it meant something? It’s got zero recognition in politics and the media, and no Web presence at all, so Clive’s only intent presumably was to scare me by trying to attack my private life, or alert his flock to do more “research” digging for dirt they can’t find.

While we skeptics are researching ice cores, Hamilton and his confused followers are out hunting for ad hominem attacks, as if this might tell them whether the planet is warming.

The chain of logic runs straight from the neolithic: Big Gun Exxon pays for Freddy’s drinks; Freddy says the planet is not warming: Therefore, the climate on the third rock from the Sun will get 3.5 degrees hotter in one hundred years of CO2 emissions. (Gosh, if only Big Oil would pay global warming researchers instead, the planet would cool down. Oh, that’s right: They do (and here), and it did.)

Dear Clive, do read some stuff about ClimateGate. It will be an epiphany. Once you realize the scientists cheated, the bureaucrats helped, the bankers cheered, and the suckers paid, you’ll finally understand why the freedom fighters are trying to save you too from global gullibility.

Dear Clive, do read some stuff about ClimateGate. It will be an epiphany. Once you realize the scientists cheated, the bureaucrats helped, the bankers cheered, and the suckers paid, you’ll finally understand why the freedom fighters are trying to save you too from global gullibility.

Bolt similarly objected to being defamed.

Photo originally from Wikimedia – Thanks Djackmanson