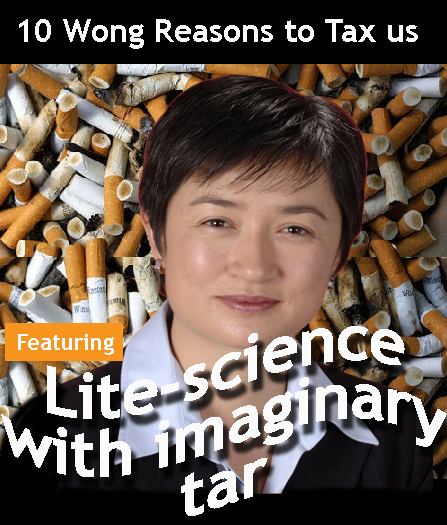 Why tobacco is central to explaining Climate Science…

The Sydney Morning Herald published a speech by Penny Wong (our Minister of Climate Change, Storms, Droughts, and Rainy Days). Sometimes I marvel that humanity ever managed to get civilized.

“Climate Sceptics are all red herrings and quackery”

Get ready for the startling Proof by Motherhood Statements & WhiteWash. I’m loosely Paraphrasing Penny, taking the liberty of including the fuller more accurate message (that I’m sure she would want to share)… [then adding a few thoughts].

A strong global agreement is apparently “manifestly in Australia’s own national interest” (and worth paying billions upon billions for). Why?

Copenhagen wasn’t the complete failure that people say. (Who mentioned a red herring?) [Countries for the first time have signed a pledge that they will control the weather and keep temperatures from rising no more than 2 degrees. It has no legal meaning in any court, but leaders who break this will be embarrassed in public.]

Evidence, that I can’t name specifically, points to climate change happening more quickly than we thought. (Though CO2 levels are rising “dead linear”, sea levels have flattened off, and temperatures have so “stopped rising” that people are calculating the statistical chances that we could call this form of rising: “falling”. Ocean heat content change has gone negative. Nothing bar anything that’s important is getting worse faster than the IPCC predicted, except CO2 emissions (which kinda flies in the face of the idea that those emissions matter eh?) Strike that… the number of skeptics is accelerating, and the number of holes in the IPCC documents has gone exponential. Damn.) **

Australia needs an emission trading scheme on carbon because some people once did misleading campaigns on the safety of tobacco. That was a totally different debate about different topics, different risks, and a different level of evidence and among a different industry. There was no UN Agency involved, and the tradeable market was tiny in comparison. Also Medical research is audited by the FDA, and the IPCC is audited by… unpaid bloggers. But other than that, there are similarities.

We’ve had lots of “hottest ever records” broken lately: If you ignore all the inexplicable adjustments (like these in Darwin) and forget that temperatures have been rising for 150 years before carbon started to be pumped en-masse, that’s quite scary. (And don’t ask me what caused the Little Ice Age, or when that mystery factor stopped.)

People claim we’ve been “hoodwinked by scientists”. (Don’t they know that scientists never lie?) Obviously this is a silly claim, because “those hoodwinked would have to include … Margaret Thatcher”. [Wong actually says exactly that. As if Margaret Thatcher would know in the 80’s that Phil Jones and a cabal of friends would say “Hide the Decline” a decade or two later… Really? Does she think naming a conservative politician who agreed with her a quarter of a century ago is like a free ticket to the land of “convincing’? Has anyone asked Mrs T what she thinks lately? ]

Carbon markets “work” in Europe. $133 billion dollars turned over in 2009, lining profit sheets of bankers, auditors, accountants and government officials. These markets work well to suck spending power from citizens and buy yachts for financial CEO’s. They also help to screw poor peasants in China and India. “Multipurpose” is the word.

Politicians in Canberra have all taken out insurance on their homes for fire or theft. [And I’m planning to sell them a policy for Asteroid Damage. Who could refuse? I mean, you never know if you’ll come home one day to find a remnant from the formation of the solar system in the spot where your living room used to be.]

One of the disastrous humiliating claims about IPCC errors was shown to be not quite as grovellingly awful as it first appeared. And the IPCC fixed one of their other mistakes.  Rajandra Pachauri knew about the error before Copenhagen, and it only took front page headlines calling for his resignation to force him to stop attacking the whistleblowers as “voo-doo” practictioners and start getting the science right. Who could ask for more?

Bonus point: Anything you say in disagreement with the above shows you are funded by big oil and trained by Phillip Morris. Therefore the World is Warming. D-QED*.

*D-QED: Don’t Question the Evidence, Denier.
** Since you asked: We skeptics can offer specific evidence that the carbon-dioxide theory is falsified: the missing hotspot, most carbon dioxide emissions have happened since WWII but it has been warming at a roughly steady rate since 1750, analysis of outgoing radiation observations by Lindzen and Choi, cloud feedback observations by Spencer, etc. See my links page for more information.]