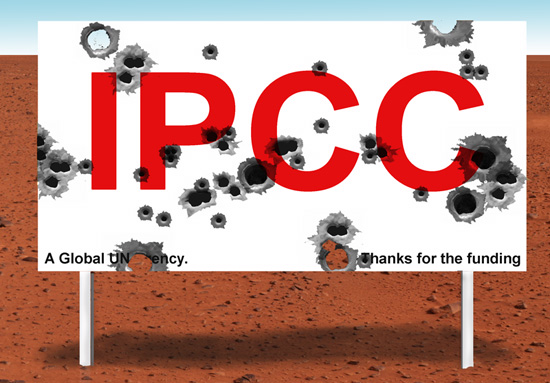 First there was Climate Gate, showing that the peer review process has descended into a criminal farce of scientific malpractice where adjusting and hiding data was de-rigueur. Hello Fraud. ClimateGate also spread to the US, where 75% of worldwide data is systematically ignored or “adjusted” until it tells the right story.

Then there was PachauriGate, showing that the man in charge of the IPCC was chairman of boards of companies that profit handsomely as the scare-factor is ramped up.

Along comes GlacierGate: about the IPCC “accidentally” using a WWF report instead of peer reviewed science papers.  After calling a 60 page Indian Govt report on glaciers “voodoo science” they were forced to apologize for that “one paragraph that was wrong”. Then Donna LeFramboise in just one day of hunting, found 16 other references in the IPCC  4th report to the “scientific journal” called “WWF”. Proving that really, the big safety-mechanism of the IPCC reputation was not in its exhaustive reviews but was in the way it made its documents so big, so dull and so unreadable, that hardly anyone actually … reads them. Call it the thousand-page-cloak-of-invisibility.

Camouflage for poor science, poor standards, bad logic, and too many vested interests to name.

Now there is AmazonGate.  The IPCC fabricates disastrous claims about the Amazon forest, and references a document written by activists that doesn’t even support the claim.

Will 40% of the Amazonian forests react drastically to even a slight change in rainfall? Is there a tipping point for the Amazon? The reference turns out to be an Australian forest specialist, who works for not just the WWF, but also for the World Conservation Union, and who according to his CV mostly works in Australia and Asia, and not the Amazon. His co-author is a journalist who’s worked on Greenpeace campaigns and for the WWF. Then, to top it off, the assertions that the IPCC attributes to them can’t even be found in the report that they wrote.

All Gates lead to humiliation and embarrassment for the followers of the great cult of the carbonistas.

And we haven’t yet got even close to the scandal of the faulty assumptions that led to the faulty models and alarmist predictions in the first place, or the even bigger scandal of how the observational evidence that proves the assumptions false is and was ignored by the IPCC.