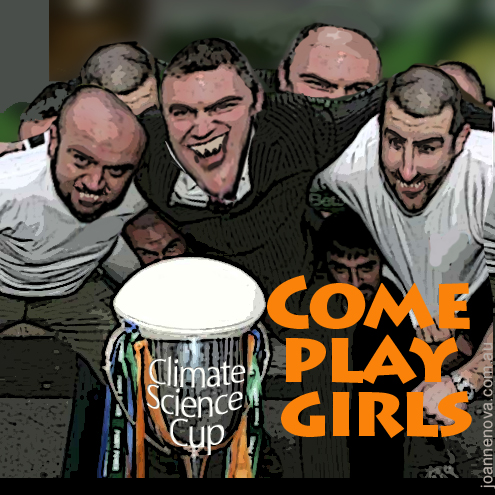 …
Richard Black from the BBC won’t name me or link to me. Is he scared of sending people my way? Afraid my arguments are too compelling? He claims the evidence for man-made global warming is overwhelming, and he’s wondering why more women aren’t skeptics, so surely he would help his readers if he directed them to the two Australian bloggers he specifically refers to: Jennifer Marohasy and myself.

In fact, across the entire sceptical landscape, as far as I can see, the female contingent numbers one UK columnist, a couple of Australian bloggers, UK academic Sonja Boehmer-Christiansen and US counterpart Sallie Baliunas…

But thanks for the backhanded endorsement, Richard, I’m delighted to find out you read my blog and I can tell you exactly why women don’t leap to announce they are skeptics. All you had to do was email me to ask…

Why are virtually all climate “skeptics” men?

Because the bullying means that anyone who speaks out, faces outright hostility. Climate hazing means women keep a low profile.

It starts with names: “denier”, “delayer”, “contrarian”, “industry shill”, “inactivist”, “do-nothing”, or “conspiracy theorist”. None of which are meant as compliments. It moves on to attacks on their mental health, and motivations. Or it just boils down to a patronising put-down: “Perhaps skeptics suffered unhappy childhoods?”

The climate change “debate” from alarmists is based on bluff and bluster, it’s about hazing people, not about evidence. Smear, slander and intimidation are not just rife, they are industrial — coming from funded blog sites, prime ministers, and vice presidential staff. (Here’s an example of someone who tried to intimidate me, and threaten my career a year ago.)

Since men are more likely to take risks, is anyone surprised that most women choose to stay on the sidelines of this vitriolic fracas?

Speaking your mind on this topic is a high risk venture — commentators risk their reputations and status — and it’s an aggressive environment, where everything they say, or have ever said on any topic, will be subject to hostile scrutiny. Skeptical players need a very thick skin. On the other hand, unskeptical commentators get lauded just for saying “me too”.

A commentator oozed: “The Titanic star is taking these things seriously. He even mentioned figures…”

Imagine that.  He had figures… ?

Someone skeptical could present figures, graphs, documented evidence, and peer reviewed papers and all they get in reward is a harsh interrogation about where their funding came from.

Those who claim there is an alarming crisis can be aggressively rude. I get anonymous emails claiming they “know” I’m funded by Exxon (I’m not), telling me I believe smoking doesn’t give you cancer, snidely demanding to know my credentials (as if it matters), and inventing reasons why I write what I write. They make up lies about me. They never apologize. When I politely show they are wrong and explain the science, strangely they never say thanks for the free tutorial.

Paid attack sites like DeSmogblog are set up with funded public relations experts to smear any skeptic who speaks out. They are so desperate to find something, anything, they smear me for working for the government 15 years ago in a science communication job that happened to be sponsored by Shell. At the time I was also a member  of the Greens political party, but they don’t mention that.

If there was a debate with good manners and less mud-slinging, we’d see more women speak up. But that’s just it. If there was a polite debate on equal terms, with an independent, curious journalist who hadn’t already made up his or her mind, it would be all over for the scare campaign.

Black is circling blindfolded around the answer himself. He acknowledges what we skeptics say:

One – promulgated by many skeptics themselves – speaks to a rigorous, analytical deconstruction of a deeply-flawed scientific edifice that is maintained by a self-interested cabal of tax-hungry politicians and careerist scientists.

Then he posits a do-it-yourself psychoanalytic view:

The other is that climate skepticism has psychological roots; that it stems from a deep-seated inability or unwillingness to accept the overwhelming evidence that humanity has built with coal and lubricated with oil its own handcart whose destination board reads “climate hell”.

And the only evidence he has for this is from a guy he met once:

As one ex-scientist and now climate action advocate put it to me rather caustically a while back: “I’ve been debating the science with them for years, but recently I realized we shouldn’t be talking about the science but about something unpleasant that happened in their childhood”.

Then he tells us that the evidence from the EU opinion polls tells him that women are skeptics in roughly equal numbers, so the only question then is not about the skepticism, but about the “prominence”. In other words, women do “get it” but don’t want to be targets.

It’s worth mentioning that in more than a decade of reporting on environmental issues, I’ve never come across a gender divide like it.

But doesn’t appear to realize that the thing that make climate “science” different to every other science is the hazing. Note that Black, like other uninvestigative journalists, assumes that there is “overwhelming evidence”. I challenge Black to name and explain one paper with empirical evidence that carbon dioxide leads to major warming  (meaning more than 1.5 degrees C). There’s plenty of evidence that carbon causes minor warming, and there are plenty of “simulations” that claim to show major warming. But a simulation of the climate can only ever give us simulations of evidence. We need evidence from the real climate, not the fake ones. But there is nothing empirical. The lack of empirical evidence does not in and of itself prove that carbon can’t have a major role, but it proves that Black is wrong and that there is not overwhelming evidence.

Not many women want to be thrown into that Lions Den.

Most of the “blog war” is a testosterone driven point-scoring game. It’s not about figuring out whether the planet will warm, it’s about winning points in a mental rugby match where there are few gentlemen. Women prefer to achieve their aims through other mechanisms than a stand-up fight.