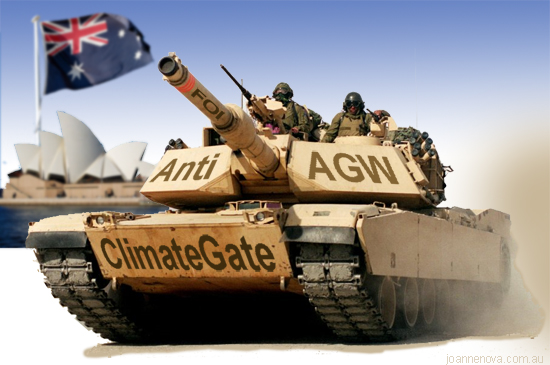 History will record December 1, 2009 as the day of the first major political damage to the momentum of the Global Warming Scam.

For the first time anywhere in a major western democracy, a mainstream party is ready to face an election on “climate change” and face the bullies. The Australian Liberal Party have elected a new leader, held a secret ballot and voted 55 : 29 to defer the Emissions Trading Legislation.

This will reverberate around the world in the lead up to Copenhagen.

The finale of one of the hottest weeks in Australian politics came down to a nail-biting 42:41 finish, but the earlier three-way split had Abbott a clear winner, and the secret ballot leaves no doubt the party doesn’t want to rush into this massive emissions trading legislation. The recent galaxy poll showed 80% of coalition voters don’t want it either.

Thanks to the ClimateGate instigator, who-ever you are. The Australian people owe you a fortune. Somehow the God of Reason has smiled upon us and our democratically elected leaders are hesitating to give away $7 billion dollars of voter’s money annually (and ad infinitum) to foreign forces in the hope of changing the weather.

The fog of the scare campaign has reached a peak and is now clearly lifting, but there is much to do. Abbott after all, supported the emissions trading scheme only a few months ago (though for political reasons rather than scientific or emotional ones).

This is a victory for grassroots action and democracy. For those who say the Liberal Party should have been allowed a vote of conscience in the Senate: One, the Labor Party weren’t (and there are skeptics in there who are relieved today); and two, who are we kidding, climate change is not a religion, is it? Hard science should never be decided by the heart. Why would anyone bother launching a weather satellite if a passionate belief could affect the atmosphere?

Senator Fielding is pushing for a Royal Commission. Let’s do the sums. Over the next decade with an emissions trading scheme Australians would pay $70,000 million dollars to foreign interests, with no benchmarks to estimate whether we have achieved anything except a symbolic victory. Cost of a Royal Commission: $100 million, or 0.001% of that outlay just to make sure. To twist some cliche’s:

Why play games with our childrens future? Have a Royal Commission.

If Rudd passionately believes the science is settled and the world is warming due to human activity, he will leap at the chance to prove it, right?

The press of course, almost to a person, don’t get it. Peter Hartcher in the Sydney Morning Herald: “Tony Abbott will offer himself as a political opportunist, a man who has switched his position to profit from a surging wave of opposition to Turnbull’s position on climate change.” [SMH]

The press just can’t see the wave of common sense coming (at long last) as politicians wake up to the global fraud.

It never occurs to those driven by ideology and not facts that there is any chance that an international committee could have been corrupted, or that human socio-political processes could be distorted, or that scientists could have been human. The press just can’t see the wave of common sense coming (at long last) as politicians wake up to the global fraud.

All credit to the dedicated hard work of men like Denis Jensen (our only science related PhD in Parliament) who’s been pointing out the illogical, unbacked nature of this for about two years to his own party. Senator Minchin’s role has been crucial (the Minchinites won!). Cory Bernardi has been outspoken. Steve Fielding’s background in Engineering has shone through, and he singlehandedly has achieved what no one else around the world has — being able to ask and demand and answer to “Where’s the evidence”.

VERY LATE NOTE: I should also have thanked Kevin Andrews for being brave enough to stand against Turnbull. His role was important in signalling to the world (and the Liberal Party) that there was a major disagreement behind the scenes.

Thanks to Andrew Bolt.

This is democracy in action.

This is what the start of the road to victory would look like.

* Having said that, there is still the faint possibility that some Liberal Senators could cross the floor. It would be an unprecedented political action, but given what has happened so far this week, not out of the question. Keep those emails coming…

Click on that picture if you want to see it larger.