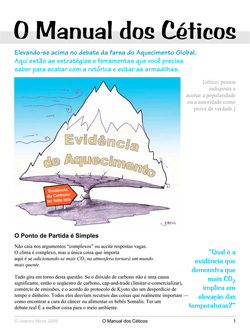 Fantastic. Just out of the blue — I had no idea it was coming — a team in Brazil has created a Portuguese translation. They contacted me when it was all done and finished. It’s remarkable. Thank you!

It’s home is on the fake climate site. (Click on the image to go straight to the pdf.) But I have a copy here as a back up.

They describe themselves as:

We are a group of climatologists, geographers, meteorologists and others from different areas, who stand as critics on “climate change”, “global warming” and “sustainable development”.

Please, send this link, or the fakeclimate one, to all your Portuguese, Brazilian or South American friends. Let me know if anyone has a contact in Portugal itself so we can spread the word there. It’s the sixth most common language in the world, with around 200 million native speakers. About half of South America speaks it, as well as many in Angola, Mozambique, Macau, and East Timor.

If one world government or a new financial system is going to take off they need to include every country, so small countries and friends in far distant places can make a big difference. The more people who are awake to the scam the better. Thanks for your help 🙂

UPDATE: If you are looking for more information in Portuguese, check out http://www.midiaamais.com.br/ambientalismo. More than 30 columns, as  well as numerous news clippings and videos related to the AGW fraud are published there.