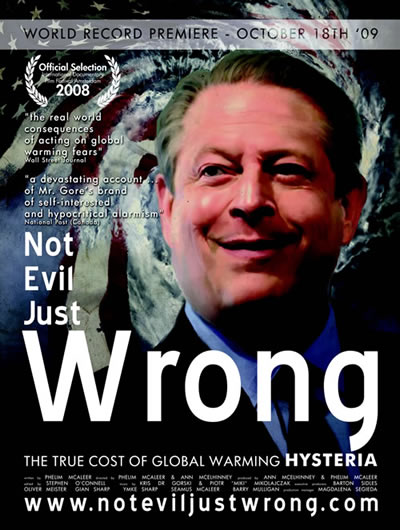 Ann McElhinney and Phelim McAleer have made a desperately needed and polished documentary. Once again, as resistance to the one-sided coverage of the greenhouse crisis grows we can marvel at the determination of people to find a new way to spread the word that there is another side to the story. Once again, grass-roots citizens rise up to fight the witchdoctors who promise to save us from their own exaggerated threats. The indomitable human spirit shines, but sadly so does the destructive power of ideology without rational debate.

Phelim McAleer summed it up on Neil Cavuto’s “Your World“:

A week or two ago, Phelim finally got to ask Al Gore whether he was planning to issue corrections to his documentary. (That in itself is worthy of a news conference. For four years Gore hasn’t allowed questions.) Not surprisingly Gore evaded, turns the question back on Phelim, and the episode rapidly degenerates into a farce as the Society for Environmental Journalists cuts off Phelims microphone to protect the ex-politician who is making vast sums of money off his version of the story, and who is clearly not answering the question. Accuracy, it seems, is not one of the things that Environmental Journalists admire. [See it here].

One of the best synopses of this event and the context of the movie is from the Washington Independent.[Here]

This Sunday, October 18 is the release data for this record breaking event. Click on the banner here to order your copy.

Bob Carter has written an indepth review at Quadrant.

In one of the most astonishing sequences in the film, two American women are shown berating a Ugandan mother for her wish that DDT be re-employed, in the process claiming that malaria had never occurred in the US, and therefore DDT could not have been used there either. Not Evil cuts to historical pictures during the late 1940s-1950s of vehicles spraying fog-dense clouds of DDT insecticide through American urban streets. Next, reassuringly, a US Professor of Public Health, Don Roberts, relates that these treatments stopped the transmission of malaria in the US, and produced no known later environmental consequences.

This snippet is from Bob Weeks review

An important episode in the film isn’t directly related to the global warming debate, but it serves to illustrate the ways we’ve been wrong before, and it gives us insight into one of the most visible personalities driving global warming extremism.

“Who here has played in the fog behind DDT trucks,” McElhinney asked the audience in Wichita. The widespread use of DDT led to the eradication of malaria in America and large parts of the world. But then a book — Rachel Carson’s Silent Spring — made a connection between DDT and danger to animal and human life. A worldwide ban on DDT followed, and malaria returned, especially to parts of Africa. Millions have died of malaria since then. In Uganda alone, 370 children per day die from malaria. She asked: if this was happening in Kansas, wouldn’t we do anything to stop it?

There are telling juxtapositions of comfortable wealthy Gore admiring Rachel Carsons work, interspersed with shots of toddlers stricken with malaria. You can hear what alarmist Steven Schneider said that was potent enough to invoke a legal ban from Stanford. (They banned the images, so the documentary makers used an actor to re-enact the interview.)

And Jennifer Marohasy has reviewed it too.

In the weeks and months to come as people see it, and it spreads far and wide, the fact that people outside the major news stations and production houses have gone to so much trouble to collate, edit and distribute this documentary is a telling phenomenon in itself.

There are screenings across Australia, though no official ones in Western Australia. I can’t host one on the night. I’ve met literally hundreds of sceptics in the last week (I spoke for 200 at a CNI function), I’m sure we can organize something. Email me joanne At joannenova dot com dot au if you want to hold one, or even just want to meet other sceptics in Perth.