Climate Money is poised to rocket—creating even larger pools of vested interests. Once it starts, how could we unwind trillions of trading rights?

Say hello to the real new force in climate science—banks. 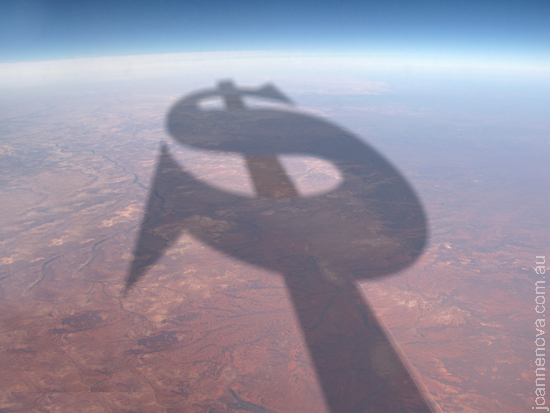 First Up. Governments Up the Ante.

In the 2008-2009 financial year, Bush threw billions on the table with financial rescues and tax credits, only to be wildly outdone by Obama.

The new funding provisions made since the financial emergency of Sept 2008 are not included in the previous table of climate funds that amounted to $79 billion (so far). It’s difficult to assign the rescue package figures into strict financial years—yet the new numbers are titanic, and step right out of the scales drawn on the past funding graphs.

The financial recovery legislation that President Bush signed1 on October 3 last year included the Energy Improvement and Extension Act of 20082 which contained about $17 billion3 in tax incentives for clean energy services.

Then in February 2009, the $787 billion American Recovery and Reinvestment Act4 was signed into law, containing some $110 billion5 in clean energy investments in the bill. Many of these “investments” defy easy categorization. For example, research into alternative energy has value regardless of whether carbon dioxide is a problem—though arguably there is less urgency. But expenses like the $3.4 billion for carbon sequestration have no other purpose or use. They depend 100% on the assumption that carbon dioxide is a dangerous pollutant. That’s a 100% vested interest.

The stealthy mass entry of the bankers and traders poses major threats to the scientific process.

Not surprisingly banks are doing what banks should do: they’re following the promise of profits, and hence urging governments to adopt carbon trading.7,8 Even though banks are keen to be seen as good corporate citizens (look, there’s an environmental banker!), somehow they don’t find the idea of a non-tradable carbon tax as appealing as a trading scheme where lo-and-behold, financial middlemen can take a cut. If you are a bank who believes in the carbon crisis, taxes might “help the planet,” but they won’t help your balance sheet.

The potential involved in an entirely new fiat currency has banks and financial institutions “wholly in bed” with a scientific theory.9 And that might be good for banks…

For the rest of us, a new fiat currency in carbon gives us the chance to support a whole new layer of parasites.

The 10-Trillion-Dollar Gorilla in the Kitchen

Commissioner Bart Chilton, head of the energy and environmental markets advisory committee of the Commodity Futures Trading Commission (CFTC), has predicted that within five years a carbon market would dwarf any of the markets his agency currently regulates: “I can see carbon trading being a $2 trillion market.”10 He ought to know. Ominously he adds: “The largest commodity market in the world.”11

Chilton puts it into a global financial perspective:

“It wouldn’t be as large as some of the financial markets — Treasury bills — but it would be larger than any physical commodity market.”12

What a relief, it wouldn’t be as big as all the loans issued to the largest financial entity on the planet—the US government—but it would be larger than iron, coal, oil, gold, copper and uranium. Can anyone else see a new species of carbon-CEOs with 100 million dollar bonuses, all paid for, ultimately, by guess who?

New Carbon Finance, a London-based investment adviser that tracks the market, predicts the carbon market will reach $3 trillion by 2020.13

“We’re going to see a worldwide market, and carbon will unambiguously be the largest non-financial commodity in the world.” He predicted trades eventually will total $10 trillion a year.”14

In other words, carbon trading will be bigger than oil, and even the promise of a market that massive and lucrative represents a pretty considerable vested interest.

“This issue is too important to our economy and to our world, and we need to get this right from the get-go.”

Too true. But the “get-go” starts with the science. If there is no evidence that we need to curtail carbon, there is no need to trade it.

6    World Bank, State and Trends of the Carbon Market, 2009. http://siteresources.worldbank.org/INTCARBONFINANCE/Resources/State___Trends_of_the_Carbon_Market_2009-FINAL_26_May09.pdf.

11    Carbon as a Commodity, Marianne Lavelle, Feb 24, 2009. The Centre for Public Integrity. http://www.publicintegrity.org/investigations/climate_change/articles/entry/1179/. UPDATED to http://www.cftc.gov/PressRoom/SpeechesTestimony/opachilton-19

2. How auditing of the Climate Industry is mostly left to volunteers.

4. Why blaming Exxon is a smoke screen to disguise the real vested interests.

5. Climate Money: Bigger Money Moves In. (You are on this page).

The full report is an SPPI Original, 4400 word pdf.