Carbon credits are a form of fiat currency, yet as calls for carbon trading grow, ironically, another fiat currency collapses—destroying life savings, wiping out jobs, and taking down historic institutions overnight.

“Just because other currencies have failed and wreaked havoc doesn’t prove that a carbon currency won’t work. It’s possible that for the first time in human history,we might get the regulation right, enforce the accounting, and fix the legal loopholes. But if most of the leading democratic sovereign nations can’t keep their own currencies from imploding, what chance is there for an international currency that
buys and sells theoretical atmospheric nullities in the third world?”

The US dollar is imploding. This is the real hockey stick graph. 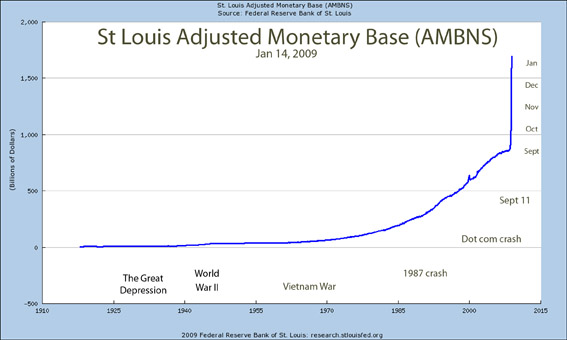 Helicopter Ben is at work

As far as the currency goes, once or twice a century our monetary system breaks. To
get an idea of the scale of the current crisis look at the Federal Reserve Bank graph (above) of the monetary base. It’s a graph to take your breath away.
The financial crisis meets the carbon scam. Hoping for a happy outcome is no reason to risk hand-feeding financial sharks. I’ve put together a paper for the SPPI:

Summary for Policy Makers
Fiat money has a long history of failure, corruption and fraud. The inevitable booms, busts and inflation act as an invisible tax, transferring wealth from people who work and save to speculators, middle men, and crooks. The US dollar—sovereign issue of a great capitalist, democratic nation—is on life support. So far at least eight hundred billion dollars has been created from thin air to stop the banking system from crashing.

Meanwhile, global warming alarmists are asking us to create another fiat currency, this time based on hot air. Large multinational conglomerates are already pouring billions into exchanges and derivatives in anticipation of carbon trading. There are ‘options’ to buy credits in the future.

There’s no longer any evidence that carbon matters much to our climate; and in the unlikely event that carbon might matter, the benefits of trading carbon don’t add up. If the US adopted Obama’s strict 80% reduction in emissions tomorrow, thus transforming the main energy source used by Americans since Columbus, the savings in carbon merely delay the claimed warmer-Armageddon by six years.

Currencies based on nothing are powerful tools that have reshaped civilizations. But they draw out the darkest elements of human nature. We open this Pandora’s Box with trepidation. Is the risk worth the benefit?

The full text is here, and the pdf is here on the SPPI site.

This is the page to comment on the paper.